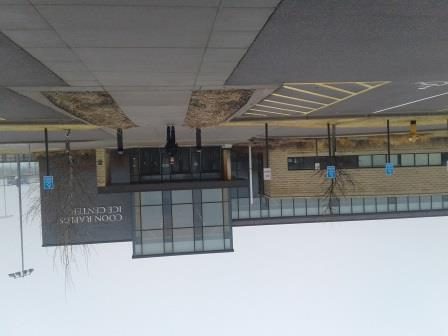 MIAMA once again proudly offered membership a chance to participate in a learning experience.  On February 22nd, MIAMA held an Arena Tour in the Blaine area with tours at Coon Rapids Ice Center, Fogerty Arena and the Schwan Super Rink.  Those in attendance were very appreciative of the opportunity to see what others have and shared a very positive day.

Thanks to each rink for the very informative tour.

Coon Rapids is a relatively new facility opening in 2011.  Arena Manager Bill Ganser shared with us the design issues, things that were working well and things that need to be changed.  We discussed the relationship one must have with architects, contractors and facilities staff.  Coon Rapids also has an outdoor refrigerated ice sheet and the group discussed the trials of an outdoor sheet.

Fogerty Arena shared its unique tandem of Electric Olympia resurfacers.  Thanks to Arena Manager Rob Hall and Olympia Representative Chris Michael from CTM Services, we were treated to the history of these machines.  The machines were built as corded resurfacers and one still runs with the retractable cord system.  The other was converted to a lithium battery system that took some work to retro fit.  These side dumping Olympia’s are worth a look.  Fogerty is home to the first year round curling rink in America if I’ve got that correct. A professional crew takes care of the curling rink with John Benton as the Curling director and Todd Birr as the ice director.  Each of them is a member of a Championship Curling team and they shared with us what it takes to run a World Class Curling facility which was very fascinating.  Fogerty has also taken ownership of the Sticks and Stones Restaurant, very popular with those in our group.

At the Schwan Super Rink, Ice Operations Manager John Flater took us on an impressive tour to the massive Schwan Super Rinks.  8 rinks and countless locker rooms is an incredible thing to behold.  The training facilities, the businesses located in the building make this a year round major training center. There was much talk about the Live Barn camera system as it’s an up an coming thing already here in many rinks around the Metro Twin Cities area. John was impressive in getting us around this facility as I can only imagine getting lost every day.

We were honored to have a few MIAMA Vendors join us and share their expertise.  Local Olympia ice resurfacer deal Chris Michael from CTM Services, Mark Rasmussen from Apex on Retrofit programs from lighting to getting a free solar program to you, Mark Bradley from CDI dehumidification and Jeff Horstman from Arena Warehouse.

It was great to have MIAMA Board Member Rick Ragan from the Delano Sports Arena in attendance.  We had attendees from Bemidji, Breezy Point Hockey Center, Braemar Arena, Champlin Ice Forum, White Bear Lake Sports Center and South Dakota.  It was impressive to have them take the travel time to join us.  It’s what MIAMA is all about and they expressed gratitude for the opportunity and enjoyed the tour immensely.

A special thrill for me personally was bringing my 12 year old hockey playing grandson.  Watching him wide eyed and observing all things he had never seen while planting the seed for the future.

We will do this again soon.  Keep in touch with the MIAMA Web Page and social media for future events.

April 03, 2019 April 2019 MIAMA Board Member Article – Walt Bruley Once again I have had the pleasure in my retirement to travel the Great State of Hockey, following my Grandson’s Bantam A team to State in Moorhead. Here is my impression of what you do as Arena Managers. #1. For me, watching the…

5th Annual Spring Arena Tour Everyone is invited to join us on our annual spring arena tour on May 17th. We will begin our tour at the Bloomington Ice Gardens 9:00am. Followed by Minnesota Made Ice Center 10:45am. Lunch (Not provided, but we will find somewhere to accommodate us) Then a tour of Braemar Arena…

Did you know MIAMA has a message board section within our MIAMA.org website? This is a great spot to check out ideas, ask questions of your peers or help out someone new in the industry. We have topics ranging from management, maintenance or just general questions of the ice arena industry. We encourage our members…

April 2018 MIAMA Board Member Article – Dean Mulso I will be in the ice rink business for 31 years as of August 2018.  I remember my first few years as frustrating to say the least.  I knew nothing about hockey and even less about ice rinks. The amount I had to learn and the…

DECC Ice has new leadership   The Duluth Entertainment and Convention Center has gone though changes this past couple years; with the opening of the Amsoil Arena and a National Championship to deal with as well as the closing of Pioneer Hall as an ice rink and finding a new mission for the…

MIAMA has (3) tickets available to Tuesday’s MIAMA Saints Social.  Answer the question below correctly to win.   Correct responses should be in by 12:00 Noon.  Send your response to Jon Balvance direclty at JBALVANCE@CADETS.COM   How many gallons of water does it take to make 1″ of ice on an NHL size 85′ x…